THE WONDER OF RUSSIAN SHOW-BUSINESS 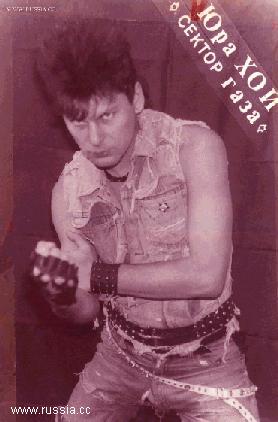 Everygeneration of musicians has its own "enfant terrible", posessing scandalous reputation and lots of very special negative attraction at a time, suchas Jerry Lee Lewis, Jimmy Morrison or Johny Rotten. In the history of Russianrock it's Yuri "Hoy" Klinskikh, leader of the most hooligan musical project"Sector Gaza", composer and author of lyrics.

The group was formed December, 5, 1987 in the city of Voronezh and stillremains one of the most popular in Russia, although it was never acknowledged officially. The name of the group has nothing to deal with the Middle East conflict, it was named after an ecologically contaminated industrial zone of Voronezh, which the natives call "Sector of gas". As for their music,one may say they play a kind of Russian punk, using different musical trends, such as rock, rap and Russian folk.

Yuri says : "The group was born at the same year with Voronezh rockclub. I've been crazy about punk music then, but life moves on and laterI was influenced by other popular musical styles, so our music went throughchanges too. You may say we knew which side one's bread is buttered, butI just play the music I like."

At school Yuri used to be one of the last one. His school-leaving certificatecontained all "satisfactory" marks with a small exception for "good" forthe subject "physical labour" (compulsory subject in Russian schools, onthese lessons girls learn cooking and boys learn repairing things). Hewas neither good at discipline. Yuri's elder brothers were fond of rock'n'roll,and so was Yuri since he was a first-former. When he grew older, he learnedplaying guitar. After his service in the army, Yuri worked at a plant.He's been spending all nights writing songs, but music was still a hobbyfor him, a way to distract himself from mundane existence.

Plain mover from a Soviet plant, he doesn't dare dream about performing on stage. But Gorbachev perestroika breaks out, censorship becomes liberaland Yuri becomes popular as an author of "forbidden lyrics", who sang about"forbidden themes" - drugs, sex, low living level in the USSR (if it wasn'tfor perestroika, authorities could put him to jail for anti-soviet activities).

Yuri became one of the first Russian musicians, who performed songswith four-letter words at stage. His songs made much noise all over thecountry, the albums "Kolkhoz punk", "Fucking crab" and "Evil dead" hitthe top of popularity, and all social layers of Russia were represented at "SG" concerts. "Authorities say we're indecent, we're forbidden by censorship, but, as far as I know, all these officials listen to our musicon the sly, it's like watching porno" - Yuri says. Due to Russian massmedia,"SG" got the reputation of "hooligans playing music for nerds",you can't hear their songs by the radio and Yuri appears on TV very rarely.In spite of this all, the group lives on. 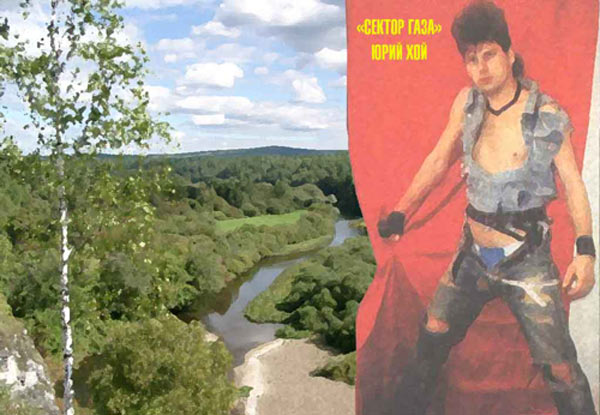 In 1994 punk-opera "Kaschey-the-immortal" was released. It's a punkversion of a famous Russian fairy tale. In this album Yuri used music ofpopular groups, such as AC/DC, Queen, Ace of Base, Nirvana and lyrics ofhis own. The album got into the top 10, and hypocritical journalists called"SG" "a young promising group from the back of beyond".

The group released four videoclips: "Kolkhoz punk", "Lyric", "The fog"and "It's time to return home". Together with DJ Mole Yuri arranged some"SG" remixes in techno, but because of the economical crisis in Russiaand, therefore, financial problems, release of the remix album is delayed."SG" uses four letter words in their songs, but they very rarely do itat their concerts. "I am using four letter words not for the sake ofit"- admits Yuri - "our songs are for those who can understand us.If you're stipid, you remain the same after the concert".

"I suppose, we're at the top of the selling list, but there's noselling list for pirate cassettes and CD's. We are paid only for the smallamount of licensed production" - if "SG" were so popular in the capitalistworld, they would have become millionares and their recording company too. Mr.Klinskikh has no limousine, he rides a plain Volkswagen. It's not very much for a punk star staying at the top of popularity for 10 years. In 1997 a new album "Narcological State University" was released. Shit-headed public opinion called it "provocative". "I tried some drugs, and I was lucky not to get used to them. I decided, that's enough for me. I thought a lot about this experience. It all resulted in my new album"- tellsYuri.

In November 1998 "SG" had a successful concert tour in Russia. And now all the "SG" fans are looking forward to the new album.

New album "Risen from a Hell" was released in October 2000. But Ury HOY didn't seen that. On the 4th of July, 2000, Yuri "Hoy" Klinslih began to feel a strong pain in his stomach and the left side of his chest. He chose not to cancel a meeting later that day to film a music video for the song "Noch Straha" hoping that the pain would simply fade away. Soon afterwards, his heart stopped. At the age of 36, he died in Voronezh(Russia), he is buried on a Levoberezhniy cemetery.Other information about Sector gaza band...

Pay attention! So-called group "ex-Sector gaza" is a fake, organized after Hoy's death by the former guitarist Igor Kushev for earning money. It has no attitude to the Sektor gaza's creativity.

Unable to connect to database